We, General and Ute, are an unusual couple with a love story and are happy to share it. And like every other couple, we have two different versions of the same event: the way HE sees it and the way SHE remembers. Both stories together make the truth. 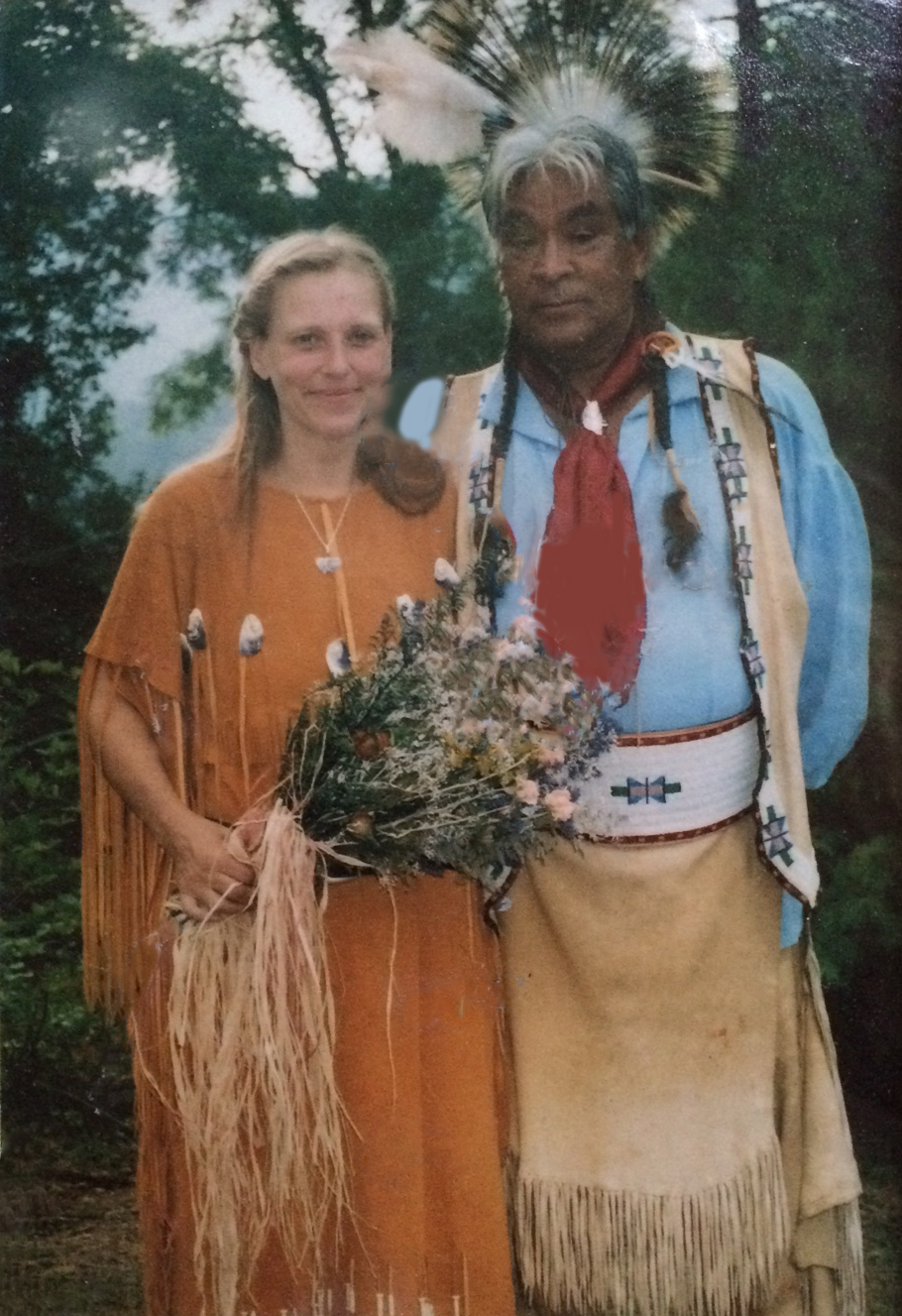 General’s version: is coming up

Ute’s version: (the # numbers refer to Additional information below)

‘Born, raised and living in Germany, I went through some difficult experiences and was looking for something that would help me to reach my ‘simple’ goal: to be happy. So I got involved in Native Spirituality (#1). After several years of identifying myself with this philosophy, I happened to join a ceremony in South Dakota: the Sundance. In the center of this ceremony which is held only once a year, is a tree. Here I met General (#2), who had very recently lost his wife after 35 years of marriage. I had lost my sister the year before. Both died from cancer. General and I just talked a lot, as far as my poor English and his non-existing German would lead us. He understood that I wanted to learn more about the ceremonies and asked me if I ever thought about coming to America for a whole year, to learn about the background and the people who keep those ceremonies alive. I had NEVER before thought about coming to the United States, not even for a vacation, but in that moment I knew that I would do it. The time period of one year seemed manageable even with the possibility that it could be difficult to be so far away from home.

After the Sundance I went back to Germany, knowing that this ceremony would change my life. I thought about the possibility to spend a whole year in Amerika but being a typical German I was focused on the obstacles that were connected to this plan. Also too: I was still in an unhappy relationship with a German man and tried to make it work. So I allowed these circumstances to distract me from the new opportunity. However, in a ceremony, I prayed for a happy relationship: I wanted a man who can accept me just the way I am and who won’t tell me that I first have to change so that the two of us can be happy. Being aware of how important the ceremonies had become in my life, I also wanted my partner to be involved in Native Spirituality so that we would be able to share this way of life.

Needless to say that the old relationship ended, which gave me the courage to make a big change. General and I had stayed in touch after our first meeting and I contacted him regarding the original idea of me spending a year in America.

In 2005, nearly one year after our first meeting I came to his home State of North Carolina to spend one year. The plan was that I would travel and work with General. He was presenting and selling Native American Jewelry & Art at Powwows and other Native American Festivals, mainly along the East coast. Especially during the summer month he would often go from show to show, all the way from North Carolina to Massachusetts, New York, New Jersey and other States and he needed someone to go with him. Shortly after I arrived we went on a trip and very soon we became very close. During the long hours on the road we talked a lot. He told me that – after a mourning period for his first wife – he decided that he didn’t want to be by himself and that he had asked creator for a woman (#3). So I told him about my prayer and that I wanted a man that would accept me just the way I am. When he heard that, his immediate understanding was that I was the answer to his prayer (see his version). First I was hesitant, because –again- I just looked at the difficulties: General being from a different culture, different generation and living in America. And I didn’t see the answer to my prayer being an ‘old Cherokee guy’. But my feelings were shouting loud and clear and my whole being was vibrating, knowing that he was and is everything I asked for.

We got married in August 2006 in a traditional ceremony at our house in Cherokee, North Carolina.

1. There are Germans who learned from different Native American Indians about traditional ceremonies. They conduct sweat-lodges and other ceremonies. They either met Indians who went to Germany or came to America to learn or both.

2. That’s why General says ‘he found me in the middle of the prairie, sitting under a tree’.

3. In Native Spirituality you talk to creator/creation like you talk to one another, because you understand that we are all related to every living being. And when you take part in a ceremony, you enter a space where you are able to communicate directly with all of your relations and whatever you asked for will come true.